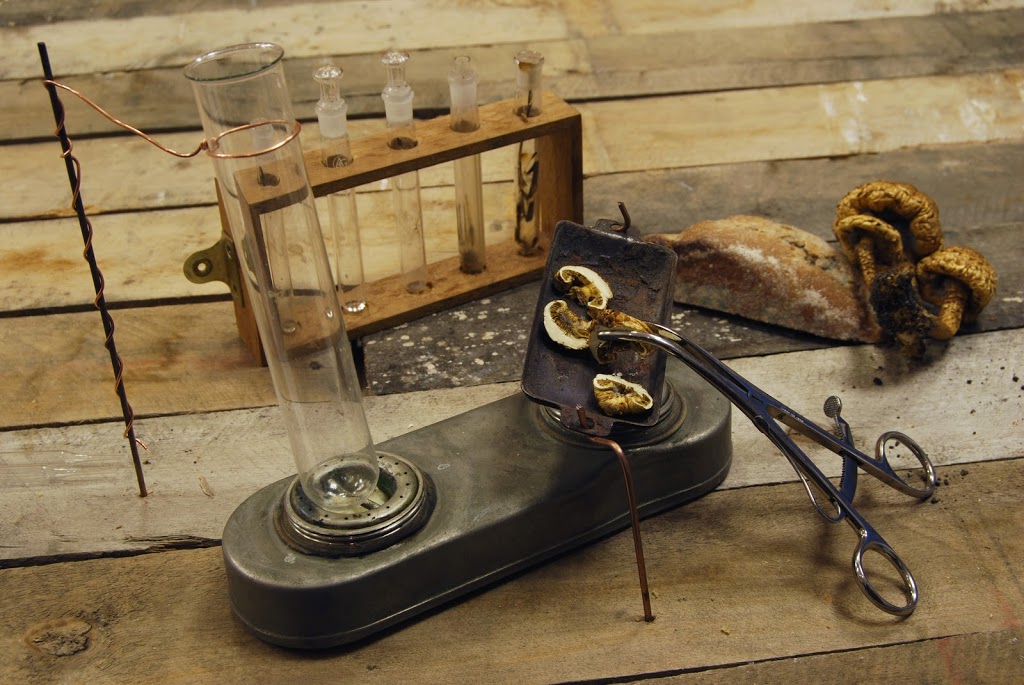 David Lisser is an artist working and living in Newcastle where he graduated from Newcastle University in Fine Art in 2009. He is based at the Newbridge Studios in the city centre where he was recently involved in ‘Response: A Rural Urban Conversation’ with Visual Arts in Rural Communities (VARC). Since June 2011, he has been artist in residence for Allenheads Contemporary Arts in Northumberland, working under the theme of ‘The Future’. His final show, ‘The Future 2, 3 & 4,’ with Alan Smith and Liam Murray, opens this Saturday 28th January.

How would you describe your current work?

Sculpture is the simplest thing to describe it.  I generally work with wood primarily, but anything I can find – interesting bits of bike, copper. I tend to make things that look like they have a use – technologies or devices. I guess what drives that is technology and human relationship to technology, how it changes society, how we change as individuals what it promises to do to our lives.

Tell us a bit about the residency in Allenheads

The first few months of the residency was spent in the village talking to people about how they think their life will look in the future. The ‘Future of Food’ was important for them, especially food scarcity and food availability, being remote, and with transport being expensive. The food industry we have is something they are very aware of. Last winter they were cut off for 3 weeks.

One of the first weeks I was there was a village meeting about life in Allenheads and they were asked, amongst other questions:  What’s the most annoying thing about living there and what would they change? – A significant amount of people said midges on both questions . I just thought that was amazing. With Allenheads the connection between the fear of lack of food and abundance of midges seemed to be an interesting one.

At the summer village fair I set up a stall and made some midge burgers. Subsequent research led me to studies on nomadic tribes in sub saharan Africa who travel to the great Lakes to catch midges.. I had done it as a joke, but it is a genuine food source for people who are travelling and don’t have easy access to food.

So for this show, I’ve created a fictional futuristic nomadic people group called the Midgecatchers who travel to Allenheads every summer to catch midges. They make cakes out of flour to sell and barter or for their own food. I’ve made a a travelling shed, and it will contain clues and insights into their life and what their life is about.

How has your work developed in the past 8 months? What has influenced it?

For the last 8 months my work has just been this residency at Allenheads and the VARC Response project. Both have had food as a strong influencing factor. I’m still working with wood and metal but more as a helpful way of making something rather than being entirely integral to the work.

With Response I used bread as medium the whole time. We had three days just to make some work as an immediate response to a very rural place. The local people were talking about community and meals, food and foodshare, and the key role that foodsharing has in building relationships, and sharing food in remote places where perhaps it isn’t always readily available. This was then compared in the second part of the project in an urban environment where food is very readily available, to an excessive level and we waste it, on an individual and corporate basis.

How has it changed being in a rural environment?


I guess the influence is intense but shortlived, because I haven’t been living in the rural environment for more than a week at a time really, and if I’d been in Allenheads for 8 months solid I’d have a different answer. I don’t know if I hadn’t been thinking about the future whether the work at Allenheads would have changed that much really, a combination of the future and a rural place is quite interesting. Its interesting you say that it hasn’t changed that much. It seems that the work produced in ‘Response…’ was deliberately provocative….

I mean I feel like we were looking for differences…

What are you trying to say through your work?


I guess like a lot of artists I don’t have any particular messages, more questions, and so if people come away asking questions  if they can come away thinking about their own personal future, or about their relationship to technology that’s a good thing. As a theologian that makes me think… “No but there is truth!” It’s not my job to communicate it… well maybe not directly, but perhaps through questioning, knocking down other so called truths.. It sounds kind of depressing but a lot of  what I’m interested in is the futility of human achievement, but in a light hearted manner…. I try and have elements of humour in my work, because if you’re laughing at our own failings that could be quite telling.

How do you see your work relating to your spirituality?

I guess I just feel for me, and for a lot of other people, making things is an activity which is close to god’s heart, in some sense, and especially making things which have a purpose behind them beyond their function, I guess a lot of people would call that art. A friend and I were talking about the phrase ‘to make good of a situation’, say if a wall had a few holes in it you could replaster it and ‘make it good’,
It’s kind of redemptive, that’s what Christians would call it anyway… big posh words which just mean making good. It’s right though, because we are called to take part in God’s plan, he asks us to, and his plan is to make good. I find that even in the physical act of making.  So when you’re planing wood and you’re checking the grains because if you plane with the grain of the wood it rolls off much easier, you’re investigating this thing which has grown and you’re taking it and using it for your own ends, and you’re learning a lot about the world at the same time…there’s something quite fulfilling about that.

Do you think you’re more in contact with your human-ness?
Yeah I think so…more in contact with the human that God wants me to be… guess its an activity that I feel blessed by doing… Do you feel more connected to God? Not always. Sometimes you get quite angry at yourself, and the world, and the laws of physics, but yeah sometimes its quite restoring. Quite wishy-washy, but yeah, making is good.

The preview of  ‘The Future 2, 3 & 4’ is on Saturday January 28th 12 – 6pm at ACAshop and Hemmel Café, Allenheads. For more information contact: alanshead@acart.org.uk