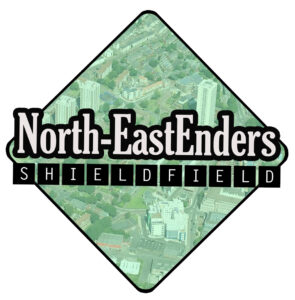 North-East Enders was initiated by Artist in Residence Andrew Wilson during October 2018. Andrew Wilson invited us to adopt the TV soap as a playful metaphor to reflect upon the many challenges facing the residential area of Shieldfield.

Often derided as addictive trash, Wilson suggests otherwise and has proposed that the TV soap has many things to offer but particularly when considering the demise of public space, social interaction, and individual and collective well-being in general.

For an example let’s consider EastEnders. Imagine the pub, The Queen Victoria;, the heart of the London– based drama has gone out of business, boarded up, and repurposed for student accommodation. Imagine Albert Square, the public green which many of the soap’s resident’s’ homes overlook, has been established as a private zone, with CCTV, and patrolled by private security guards.  And imagine the local café, Kathy’s, previously owned and ruan by local residents has closed to make way for a Tesco Metro or a Subway franchise.

How would these changes alter the interactions between the London borough’s fictional residents?  Where would the characters encounter one another, if at all? What impact would these changes have on the everyday engagement and long-term wellbeing of the fictional residents? And now, if it is plausible to imagine an entire cast of individuals, sat at home, alone and socially isolated, how do these imagined scenarios reflect our own lives and social surroundings?

Hosting multiple opportunities for residents and workers in Shieldfield to encounter one another, including workshops, conversation events, and screenings, this residency has been the beginning of a process to collectively reimagine our daily lives through storytelling, narrative building and collaborative film-making.

You can discover details about individual events below:

SAW hopes to continue North-East Enders as a long term project, and is seeking additional funding. 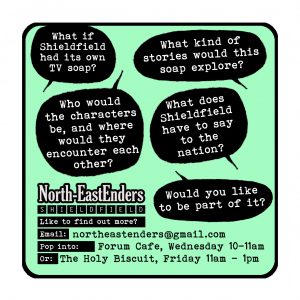