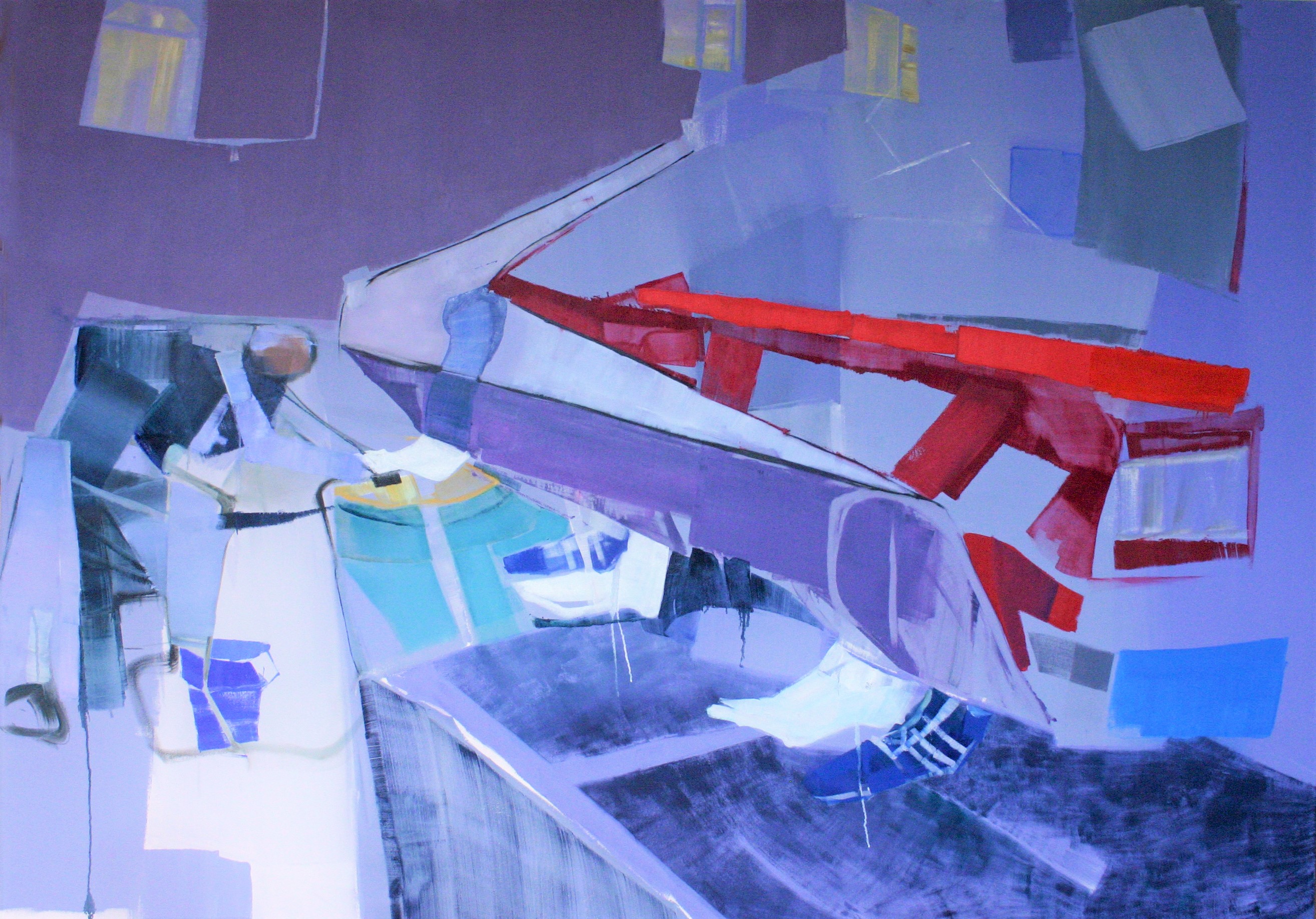 Can we believe what we see? What we read? Is everything ultimately a “truthie”, just one among many alternative facts?

What immediately speaks truth to me in Dave Tweedy’s work is its distinctiveness. This is not a rip-off, a take-off, an ironic commentary on X or Y, or propaganda. It is original, not derivative. And that’s all the more remarkable, as these works are assemblages, painted collages of re-membered things. Yet for all the strong sense of composition, they evade any attempt to reduce them to a common structure or pattern.

Key, I think, to understanding Dave Tweedy’s work is his sense of ritual – whether sacred or secular. So in Saturday Night Sunday Morning, the ritual of his father washing the car on Saturday evening comes together with the family going to Sunday morning Mass. And that takes us further: it was the 1970s, a time of white socks and trainers. Remembered in the light of the Catholic Mass, these trainers recall the ceremonies of Maundy Thursday: the re-presenting of Jesus washing his disciples’ feet. Elements of a reverie, which ritual joins together, and does more than “lend” significance: the extraordinary depth of ordinary things is revealed.

Reveries are not necessarily comfortable, though. Tweedy offers us no escape to a golden nostalgia. In his compositions there are gaps, breaks: truncations even. In Gate Fold, figures – specifically, two of the ABBA stars in Seventies footwear – are cut off at the waist. The inspiration is actually the people’s eye view of Catholic priests prostrated dramatically on the church floor during the Good Friday service, which commemorates Jesus’ death on the cross – only their legs and vestments could be seen from the pews. And this particular work is a crossing point of some of the biggest issues faced by Christianity, and indeed by the world. The body –celebrated by clothing and hidden by it. The priestly vestments – revelation or disguise? The priests were prostrated before the gate of the sanctuary, the sheepfold of God’s people. Are they drawing the people into the holy place, into deeper truth, or shutting them out? Structuring or cutting off?

Tweedy is particularly fascinated by carnival, which, as the Church’s permission to misbehave, traditionally straddled control and freedom. Again, though, he refuses any simplistic dichotomies. Carnivals have their own rituals, their own structures, and as such carnival is a spectacle which can either liberate or confine, do good or evil. Circus Maximus recalls Fifties and Sixties Technicolor films, such as Ben Hur, a film of spectacle and a film race and redemption. But Great Again, recalling President Trump’s promise to make America “great again”, is an unapologetically angry attack on the nostalgia of dictators who recall a past mixing folk memory with “alternative facts”. The Republic elephant is rampant against the dark background of the Holocaust transports and pitilessly right-angled forms. Either-or, black or white, unyielding binary, recalling for me the relentless, oppressive rhythm of Fritz Lang’s 1927 film Metropolis, a terrifying prophecy of the totalitarian society which was to come about only six years later.

So for all the strength of Tweedy’s compositions, do they reveal only conflict and opposition? Is there no redemption, no healing? Certainly, Tweedy refuses to offer immediate comfort, just as he refuses the label of “Christian artist”. Label art with “Christian” (or Buddhist, or Marxist, or ecological…) and art is reduced to instant message, propaganda, a truthie… Jacques Maritain (1882-1973), a philosopher and convert to Catholicism, famously said, ‘God does not ask for “religious” art or “Catholic” art. The art he wants for himself is Art, with all its teeth.’ Tweedy’s art offers us the teeth of truth – and not just the truth of conflict. Redeeming truth emerges in the process to which his art invites us:   Tweedy’s own process is represented in the scrap books which form the raw material of his paintings, and are included in the exhibition.

In Gate Fold, we are invited to the process of mysteries of the Maundy Thursday and Good Friday, healing in spite of the human faults in the presenting of these mysteries. Opening Hours, about the moment before the assassination of John F. Kennedy in 1963, depicts the death of an era. Yet the title alludes to a book of hours, a medieval devotional. Grief opens to a deeper consolation. The work of art, the object, steps aside as we step into process, the process of the extraordinary depth of ordinary things. Image gives way to Resurrection.

Fr Dominic White OP is Arts Officer at St Dominic’s Priory, Newcastle, and a chaplain to Newcastle and Northumbria Universities. He is the author of The Lost Knowledge of Christ: Contemporary Spiritualities, Christian Cosmology and the Art (Liturgical Press, 2015) https://lostknowledgeofchrist.wordpress.com/