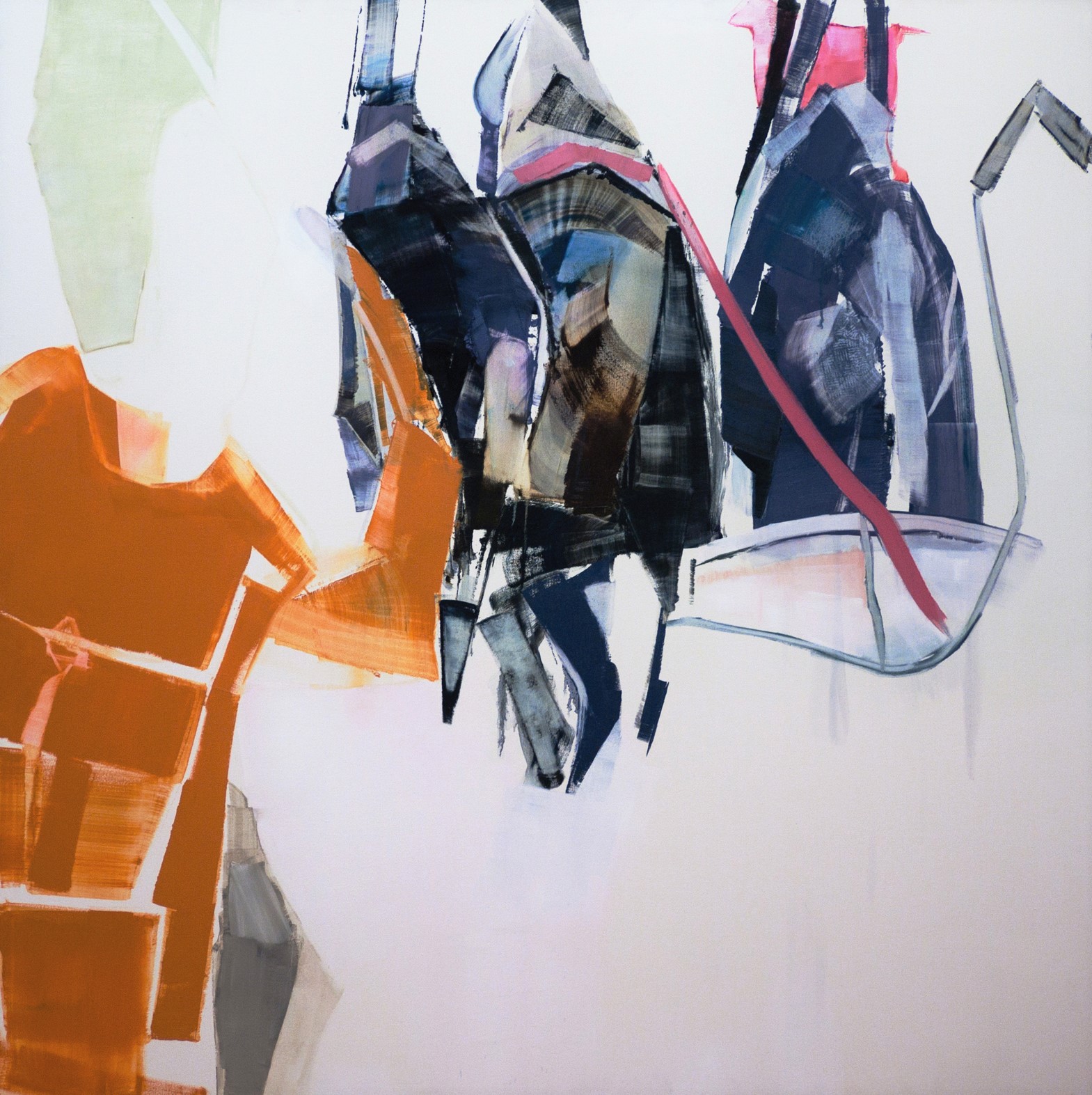 In Present : Past Dave Tweedy has developed an increasingly pictorial language within his paintings. Drawing — literally painting — from personal and common memory, Tweedy interweaves and overlays historical and contemporary signifiers to create new-found (dis-)orderings of reality. At these intersections of people and paint, abstract and figurative languages conflate; familiar imagery is altered, distorted and re-situated; and our attention is equally drawn to the textural qualities of the paint, as it is to the base imagery. Channelling a visual potpourri of references, the brazen indulgence and heroicism of 50s Hollywood cinema, the duotone graphic sensibility of Saul Bass’ silhouetted movie posters, the image of 70s pop legends Abba, and the spectacle of American politics past (and present) all compete in a medley of re-signification.

Situated in the context of art history, the status levied through portraiture is part of Tweedy’s fascination with his iconic subjects. Equally relevant to his investigation however are the underlying belief systems, or personal idolisms by means of which: formalised religion operates, political evangelism flourishes and the grounds on which fandom and populist significance is heralded. Acknowledging the clear subversive tendencies in this questioning of authority, Tweedy has otherwise acknowledged a long-held fascination with ideas of carnival.

Existing in variant forms amongst different cultures and creeds, the traditions of carnival nonetheless share distinct commonalities as sanctioned forms of exuberance, mischief and momentary inversions in the systems of governance. In his essay Exaggeration and Degradation, Roger Malbert’s describes the carnivalesque as being founded upon ‘the conventional dualisms of “high” and “low”, order and disorder, government and the people, god and the devil.’ And, it is on these grounds that Tweedy manipulates and others the roles and status within the imagery he appropriates.

Gate Fold (2016) as with many of Tweedy’s recent paintings, is dominated by large areas of flat colour. Indeed, the whole surreal composition sits flat upon the surface of the dream-soaked canvas. In the foreground four truncated-figures lie in supplication — their bodies seemingly severed at the hip. Drawn from a photograph depicting devotional acts of prayer during Easter celebrations, the image functions as a trigger to memories of the artist’s own childhood. Here, in the self-same venue, during an equivalent moment of festivity, he clearly recalls not the event itself so much as the boyish daydreams that pre-occupied his consciousness. Vividly recalling his dreams of ABBA — his will to be elsewhere, doing something else — this memory is reinserted into the setting. The imagery lifted from the gatefold cover of ABBA’s Greatest Hits LP; the composition re-orientated around the tan-brown-knee-high boots and turned-up jeans worn Agnetha Fältskog. As such the devout male protagonists in the original image, are willingly substituted for members of the oh-so-glamorous Swedish pop-legends.

As absurd as this composition may be, in medieval cultures during times of carnival there were clear equivalences. Amidst the peculiarity, a dog may have been bestowed the authority of a bishop; in the name of revelry, the jester fleetingly crowned in place of a king. In the spirit of such, Tweedy has sought to apply a similar spirit of questioning to the newly appointed authority of the President of the United States of America, Donald Trump. Painted following his inauguration, Circus Maximus (2017) transposes together a cinematic still from the historical epic, Ben-Hur (1959) with an orange caricature of the Commander-in-Chief. The source imagery epitomises the heroic idealism of the screen — Charlton Heston’s Judah Ben-Hur the righteous hero, valorous and victorious — but in the painting, the metaphor, Trump is provocatively re-appointed in this role. Ben-Hur a pinnacle Hollywood export, a moral victory, a hero’s tale – would that be the role Trump imagined for himself as the man to Make America Great Again?

The origins of this phrase are in fact credited to Ronald Reagan, however on November 12, 2012, Donald Trump officially trademarked this slogan – made it fundamentally his. Likewise the image that Trump and his wife Melania have sought to emulate is itself an appropriation, lifted from past presidential-greats, the Kennedy’s, as an endeavour to channel their aura. In Opening Hours (2016), Tweedy paints this muse relatively straight – a re-interpretation of the Kennedy’s motorcade prior to the assassination of J F Kennedy.

In Bullet Points (2017) the allegory becomes more abstracted. The synonymous Lincoln Continental of the motorcade has been substituted for a coach-built perambulator; Jackie-O’s distinct baby pink clad silhouette replaced by the baby-blue Ralph Lauren dress of Melania Trump.  Here, as in other paintings, there is a degrading of the symbolic value of one signifier, coupled with the application of a more subjective vernacular of another: the supposed likeness is under debate. The pram on one register seems to evoke pathos, a universal concern for its passenger, but equally, it functions as a symbol for the infantile, the irresponsible, the naïve. However the reference of the outstretched arm, clambering out from the pram is more specific – more located. It formally mirrors that of the First Lady at the moment her husband, JFK fell. The pathos we have for that historic moment is something that can’t be harnessed, borrowed or appropriated. We can’t be hoodwinked by this assumed guise the Trumps are attempting to pull off. This play on authority – on authority claimed by powers of order, through the coutured dress of governance – seems here, to foremost evoke, those very aspects of the carnivalesque.

*The title is drawn from conversation with the artist

Matthew Hearn is a curator and writer based in Newcastle upon Tyne. He presently lectures on the BxNU MFA at Northumbria University.

He has curated a number of large scale exhibitions of international practice, including Re-make/Re-model, National Glass Centre, Sunderland (2010) RIFF/T, BALTIC’s Project Space at BALTIC 39 (2013/14), unpainting \ / resurfacing, UH Galleries, University of Hertfordshire (2015) and A Deceptive Cadence, Phoenix Gallery, Exeter (2016). As a writer and editor, he has contributed to various magazine and publications and has written widely around artists practice most recently including Steven Emmanuel, The Good Life (RWE Foundation International Artist in Residence Programme, 2015) and VITAMIN p3: New Perspectives in Painting (Phaidon, 2016).

Present : Past runs 11th March – 5 May 2017; Peer Forum, Thursday 27th April 2017 2 – 3.30pm: Join us for a look at the exhibition over a cup of tea followed by a discussion and Q&A session with Dave Tweedy. If you are working or studying within the context of fine art, curatorial practice or art history, we would love you to contribute.