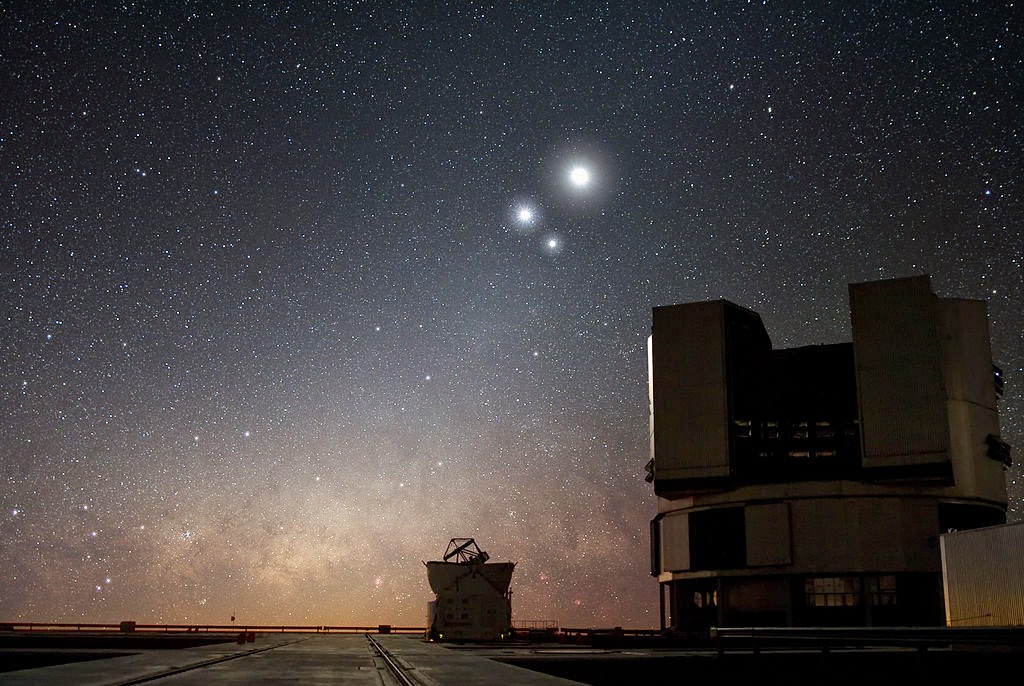 Exhibition Extras
What was the light in the sky?
20th December 2014 By Carol Davenport
0

After Jesus was born in Bethlehem in Judea, during the time of King Herod, Magi from the east came to Jerusalem and asked, ‘Where is the one who has been born king of the Jews? We saw his star when it rose and have come to worship him.’ Matthew 2 v 1 – 2
Comets
One suggestion for the star is that it was a comet.  Comets are giant balls of ice and rock that orbit the sun in a huge oval.  At times they are very far away from the Sun, but at other times their orbit brings them closer. As a comet approaches the Sun it starts to heat up.  The frozen ice begins to melt and is blown away from the comet by the solar wind.  This is the tail of the comet that we see from Earth. If a very bright comet approached the Sun, then it would have been visible from Earth for some time.  Ancient Chinese records have two possible sightings of comets at about the right time, one which appeared in March, 5BC and one which appeared in April, 4BC. However, in the ancient world comets were usually seem to be signs of Doom, indications that bad things were about to happen.  It is unlikely that they would be seen as heralding the birth of a King.
Planets
Ancient astronomers knew about two types of star – the fixed stars and the wandering stars. The fixed stars appeared every night and stayed in the same position compared to each other. The wandering stars moved about the sky, rising and setting in different places.  These are not actually stars, but are the planets Mercury, Venus, Mars, Jupiter, Saturn.  You can see these in the night sky without using telescopes or binoculars. The reason that the planets appear to change position in the sky is because they take different lengths of time to orbit the sun.  This means that we need to look in different directions to see them. However, the behaviour and position of the planets would have been known by the magi.
After they had heard the king, they went on their way, and the star they had seen when it rose went ahead of them until it stopped over the place where the child was.  When they say the star, they were overjoyed. Matthew 2 v 9 – 10
Triple Conjunction
When two, or more, planets appear close together in the night sky then this is known as a conjunction. Sometimes, when the Sun, Earth, Jupiter and Saturn are in a certain alignment then a Triple Conjunction can occur.  This is when the two planets appear close together in the sky three times in a short period.

The pictures show the different positions of Jupiter and Saturn on three dates in 7 BC.  This is when they were in conjunction and would be seen near to each other in the sky.  In between these dates, the planets were not visible because they were in the sky at the same time as the Sun. The quote from Matthew suggests that for a while the star wasn’t visible, but then it reappeared.  A triple conjunction would explain this. It takes the Earth one year to orbit round the sun, but it takes Jupiter twelve (earth) years, and Saturn just under 30 (earth) years to orbit the sun.  This makes a triple conjunction quite rare – they only occur once every nine hundred years. Although the triple conjunction could have been predicted, the fact that they occur so rarely would have meant that the Magi would have taken it to be a signal of something important happening.

Think Physics is a three year project based at Northumbria University.  Our aim is to show students that studying science, particularly physics, opens doors to a wide range of interesting careers. We will be working with up to 30 partner schools (pre-school to post-16) from around the North East, focussing initially mainly on Newcastle, North Tyneside, Gateshead and Durham.  We aim to interact with every child in our partner schools at least once, but hopefully more than once, during the project. As well as our partner schools, we will also be organising activities and workshops for other schools in the region. We will also be taking physics out to the wider public through collaborations between Think Physics and art galleries, festivals and other community organisations. The project is a partnership between the university and other organisations including the Institute of Physics, Kielder Observatory, Centre for Life, North Tyneside Learning Trust, Gateshead LA, Durham LA, North Tyneside LA, Durham LA, Solar Capture Technologies, and EDT. Funding for the project was given from the HEFCE catalyst fund.
think.physics@northumbria.ac.uk
thinkphysics.org
@ThinkPhysicsNE
Share this...