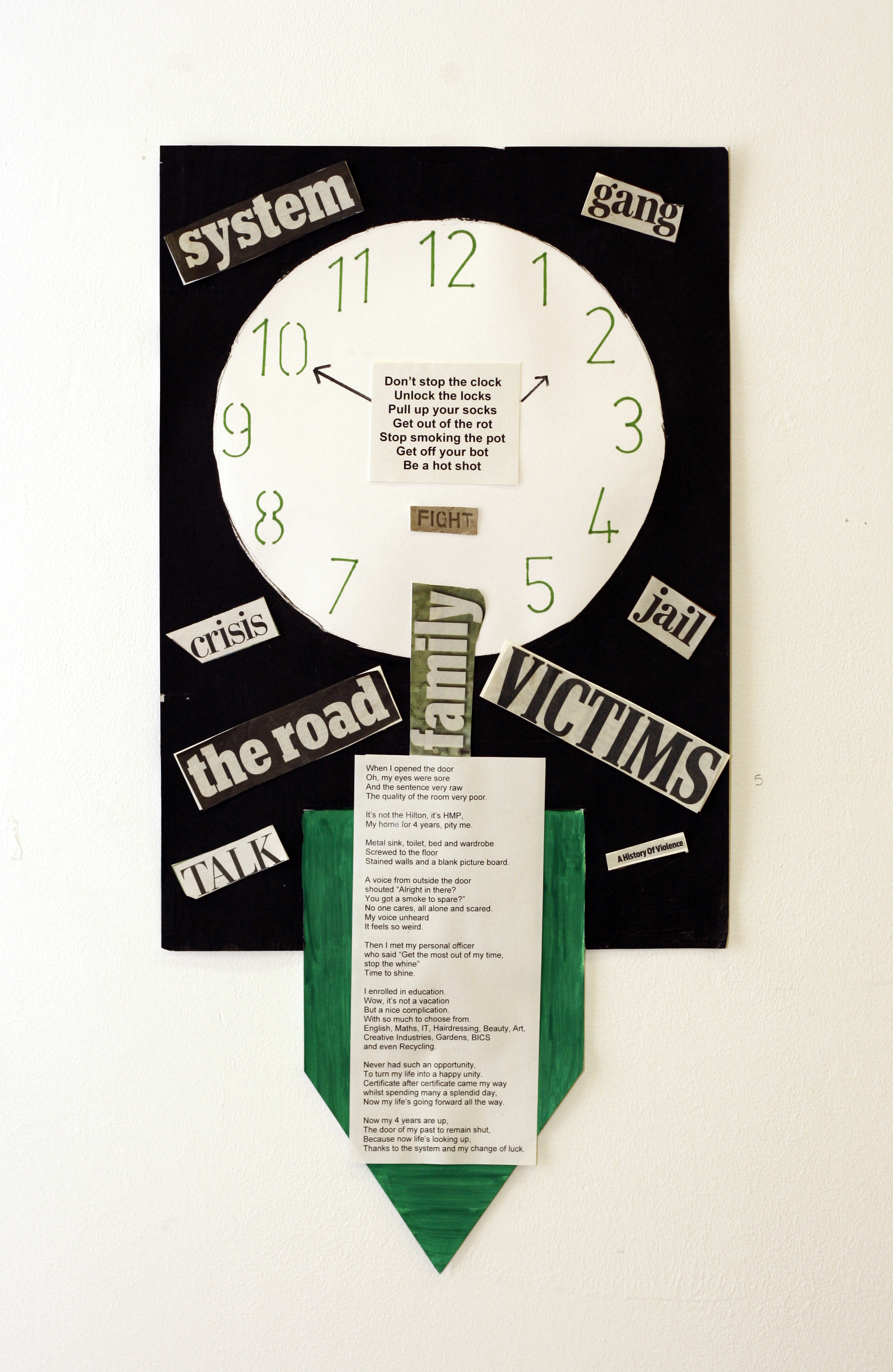 Responses to “Your Deeds Don’t Define You”, No. 3:

“We don’t know. Seriously, we have no idea.”

Image above: ‘Tick Tock’, created in a Junction42 workshop by ‘H’

10 years of my life I can’t get back. How do you deal with that legacy, those memories, the way it shapes your future, the ways in which you allow it to define you?

In prison people look through you and you find yourself looking through them. Did I come out after 10 years a better person? Better able to cope with society? More adjusted, more aware of the impact of my behaviours on the public and on those I loved most? Did I allow my deeds to define me?

I tried to be different in prison, to treat people decently. Sometimes I was kind to people, sometimes I wasn’t; sometimes people had a better day because of an interaction with me, sometimes they had a worse day. I tried not to judge others, even when I knew what they’d done. Not everyone tells you what they’ve done; some won’t admit to it, some can’t. We all create escapes; narratives which minimise the harm we have done, trivialise or justify our roles in the offence and hurt of others, mitigate our mistakes and abdicate from responsibility. I did it frequently, for ten years. I avoided things I didn’t want to do, I defied authority, I used alcohol and recreational drugs to escape reality as many do, and I spent countless days thinking what life would be like if I’d chosen differently. Some days I did what I was supposed to do and some days I didn’t. Occasionally what I did helped people out – I’ve stopped a fair few people from killing themselves – and sometimes what I did didn’t help; I’ve touched a few dead bodies. Our deeds do define us, even if they define some of us more than others.

If anything, prison taught me not that people can change (they can) but that this itself is not the issue because the end user of the system is not the only one who needs to change. Jesus didn’t sit with the criminals, the disenfranchised and the marginalised to show solidarity and teach us that we should be more caring, for me anyway. This is too easy an answer. Jesus did it to shame our collective inbuilt prejudice against what doesn’t look like us; the capacity and willingness for humanity to segregate itself by strata of power and influence, the root of which is invariably money. Some crimes are more obvious than others and as blunt instruments of bones and flesh most of the time we choose to deal with (read punish) the obvious and easy to manage – individual crimes. Whilst this is needed for a lawful society, it also creates our own escape, the construction of the same responsibility-minimising narrative you find behind most cell doors. There is no difference between inside and outside. We allow the terrible deeds of others to define the virtue of being us.

We the virtuous ones, who are not criminals. The ones who never choose to examine our corporate complicity in every day criminality; the child labour clothes that we all wear, the smartphones we can’t live without made from minerals mined from the ground by modern day slave labourers. If that’s too hard to think about then consider this; the ubiquity of clothing, phones, luxury products made in criminal conditions around the world available in every shop we use is actually only the natural outworking of our empire state of mind; that deep down Britain is somehow better. Our deeds don’t define us; because they aren’t our deeds, or at least the racist, greedy, violent deeds done by our colonial forefathers don’t define us even though they profit us and subjugate others in perpetuity. We aren’t criminally culpable for the slavery and bondage of those who we have systematically exploited around the world first through empire and now through modern trade agreements. No! Those deeds don’t define us! Give us clear cut, individual crimes where we can point at an individual and lock them up! Them not us; their deeds not my deeds, there is no our deeds. “God, I thank you that I am not like other people—robbers, evildoers, adulterers—or even like this tax collector.”

For 10 years in and out of prisons, and for a couple of years since I last stepped foot in one, in the back of my mind, every day, was the desire to make the world a bit better, to offer hope to others, to be a compassionate human being in the midst of my own failure, disappointment and the mess and pain I saw around me which I both caused and simultaneously sought to alleviate. Jesus stepped into the mess and the pain, and calls me after him.