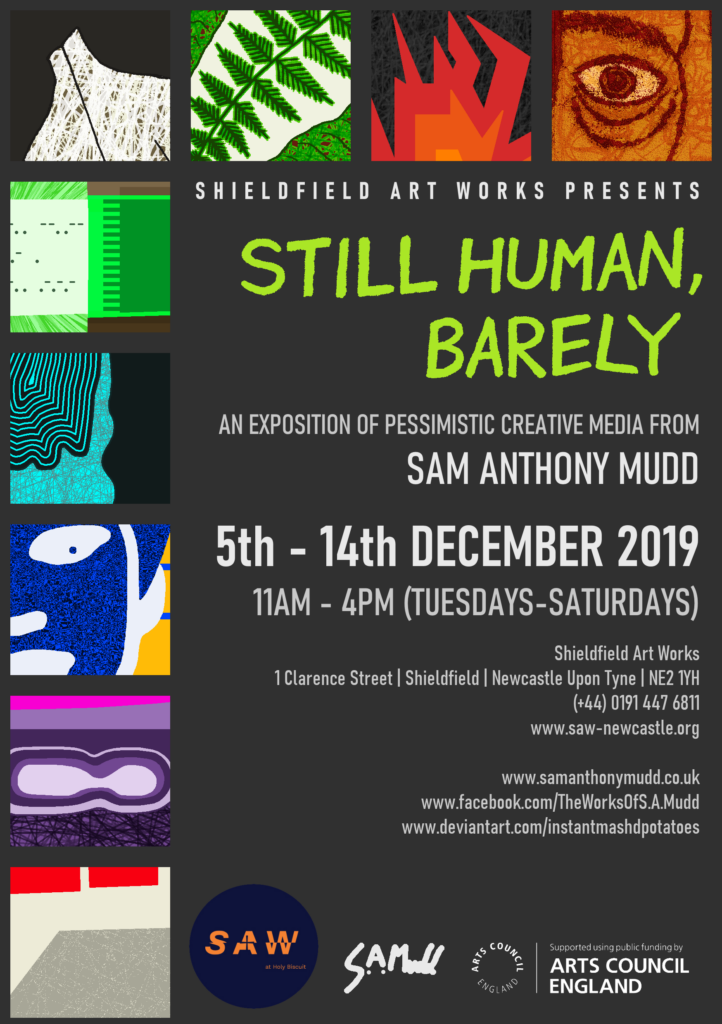 An Exposition of Pessimistic Creative Media from Sam Anthony Mudd

His first solo outing in 4 years, ‘Still Human, Barely’ will document a selection of his artwork from 2016 to 2019 – detailing a particularly turbulent period in Sam’s life where his interest in the arts was brought into question (as portrayed in his 5-part series, ‘The Posenenske Dilemma’) as well as journaling an ongoing conflict with himself and what remains of his humanity as an individual diagnosed with High Functioning Autism, Social Anxiety and Clinical Depression, conditions which have played a significant role in many of his creative endeavours.

For those unfamiliar with Sam’s work, it can best be described as abstract in construction whilst maintaining a therapeutic sensibility. The majority of work in his portfolio has been created digitally, however in recent years he has experimented with mediums such as painting with black ink, drawing with charcoal and monotype printing – all of which have helped to broaden his horizons. Whilst the inspirations behind his works are normally explained in great detail through the artist’s own statements, he invites people to take in what’s being presented and compose a meaning that makes sense to them.

Throughout the duration of ‘Still Human, Barely’, patrons and visitors will have an opportunity to partake in a collaborative “audience-participation” art project entitled ‘EGOCENTRIC 2019’, a 6-part questionnaire where the answers are intentionally left open to interpretation with a view to him creating “visual noise pieces” using collected submissions.

For additional insights on Sam’s work and information about his previous achievements, please visit his website at www.samanthonymudd.co.uk