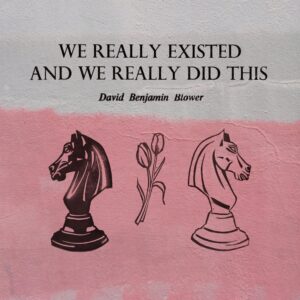 Join us for a musical and spoken-word performance with David Benjamin Blower as he takes us on an apocalyptic folk odyssey through our unstable present. His songs and readings are a meditation on the time between a waning past and a potentially catastrophic future.

David creates a space for lamenting endings, loss and collapse, where a growing awareness of the ecological catastrophe we’ve triggered opens out into melancholic wonder at our very existence.

From the post-industrial melting pot of Birmingham, David Benjamin Blower has been as a prolific folk musician, podcaster, theologian and poet for the last decade.

His music has ranged from beat poetry to folk song, full of radical imagination, aching heart, and a spirituality between the sacred and the profane. DBB is influenced by literature: poets, prophets and philosophers, as well as film, and by the pain and wonder of living.

Recent releases have spanned from protest songs about the refugee crisis, Waitsian story-telling concept albums, and collaborations with theology professors and podcasts.

The forthcoming release, We Really Existed And We Really Did This, is a folk odyssey woven through with the troubled words of thinkers and poets, which tells the story of the present: as a unique moment between a collapsing past and a very uncertain future. This is work of joy and lament.