A Shieling for Shieldfield

Dwellbeing – a local community group in Shieldfield and SAW are currently in the process of a design for a new community building named ‘Shieling’ and a community garden in SAW’s grounds. Shieling and the garden will play host to a range of activities which are led by, and responsive to, the community of Shieldfield. Shieling will have three main functions: 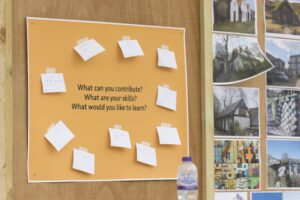 Shieling and the garden will play host to a range of activities which are led by, and responsive to, the community of Shieldfield. This will be a space to build community activism and knowledge about the issues that affect the neighbourhood. Whilst the building will be used for many community activities, it will also be a learning space and will house an archive/library of resources which examine and engage with issues of urban development, including land activism, planning, gentrification and housing. Both Shieling and the garden will be built with the local community showcasing sustainable and participatory forms of building, using locally sourced, repurposed and ecological materials.

Shieling derives its name from Shieldfield. One theory about the name ‘Shieldfield’ is that it was once a shieling ground, where people would come and graze their livestock in the summer months. In fact Shieldfield was common land up until it was enclosed in 1738 – with only a small triangle of space – Shieldfield Green – left as common land. After this land in Shieldfield was gradually sold away piecemeal, first by hereditary landowners.

The work ‘Shieling’ refers to the huts or bothies that the farmers and workers would live in – self-built, rudimentary huts that would be constructed using whatever they could find lying in the landscape around them including turf, timber, earth, and in the uplands, heather or peat.

In essence Shielings were built from the earth – from the roots of place, from the materials that were grown in that earth, and the substance of the earth itself. And so it is a powerful tool for us to use to think about how we might design and build a community space that, itself, is built from the ground up, from the roots of place, using its natural ecology and drawing upon its people, its materiality and its histories. Part of the impetus for this design and build process is to use the symbol of Shieling to build a collective right to land in a neighbourhood that is subject to increasing development pressures and so Shieling is a symbol of a lost common way of living, and of a physical relationship to the land.